History of Synthesis Part 1 – Back In The Beginning

In the last post in this series I suggested that the synthesizer is stuck in a keyboard / oscillator / filter mindset. Perhaps the first step in breaking this mindset might be to take a quick look at the history of the synthesizer. Well here is part one of that history. 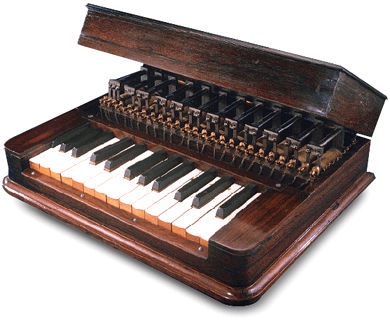 Imagine trying to make electronic* music with no electronic devices and no means of recording sound – not even a wax cylinder gramophone. It was done – most notably by two gentlemen:

Elisia Gray built his “Musical Telegraph” in 1874 which looked remarkably like a modern synthesizer and used vibrating relays to produce notes.

Theaddus Cahill designed what is probably the biggest musical instrument ever. The Telharmonium used spinning gears and magnetic pick-ups to produce tones and weighed in at 200 tonnes.

Both these instruments used the, then new, telephone network to transmit their music to the customer. Thus inventing media streaming 100 years before the invention of the internet!

Electronic music proper started with the invention of the triode valve in 1928. This made it possible to design electronic amplifiers, filters and, most importantly, oscillators.

One of the earliest and one of the most famous electronic instruments is the Theremin, shown here being played by its creator, Russian, Leon Theremin.

This gives the Theremin a unique sound (beloved of old sci-fi movies) and it is still made and played despite its simple tone generation system. The unique way of playing the Theremin inspired new styles of music.

The Theremin was followed by the French Ondes-Martenot which used similar tone generation circuitry but was controlled by a conventional keyboard and an early ribbon controller. The actual sound was produced by a bizarre device that looked like a cross between a speaker and a guitar. This added colour to the sound like a guitar body.

The Synthesizer Is Born

The first synthesizer, as we would recognize it, was built in 1957 by RCA in the USA. It was a 24 oscillator modular which, because it used valves filled a whole room. The only way of “playing” it was using its built in sequencer. This had to be tediously programmed by punching holes in a roll of paper. Not intuitive.

As a result it was only really of interest to academic composers who were already used to committing their compositions to paper before they heard them.

The advent of the transistor brought the size and cost of electronics down by an order of magnitude. Now synthesizers could be built that would fit in a recording studio and were affordable – at least to rock stars and studios. Probably the most famous builder of these early modular synthesizers was Robert Moog. Moog hit upon the idea of controlling the synthesizer parameters with a standard voltage. This allowed a high degree of compatibility between modules and hence they could be connected together very flexibly.

The early systems were mainly used by academics and take-up was slow outside academic circles. This despite Walter Carlos’ “Switched On Bach” album proving that they could be used to produce music for a wider audience.

The problems were the cost was still high and most musicians found the dozens of knobs and miles patch cables intimidating. “OK so it’ll do amazing things but how do I get it to do what I want to do?”. A problem that still exists today and one which I shall return to.

At the same time as the early transistorised modular synthesizers were being developed two types of keyboard instruments were being produced which used electromechanical methods to produce sound.

The electric piano, typified by the Fender Rhodes, used hammers to hit metal tines (similar to half a tuning fork) and picking up the resultant vibrations with a guitar type pick-up. It didn’t sound like a conventional piano but it made a great sound all of it’s own.

The electronic organ, most famously produced by Hammond in the USA, used magnetic pick-ups with rotating gears. Just like the Telharmonium I described above! Initially intended to be a replacement for small pipe organs it soon became a hit with musicians in general.

Both of these were (just about) portable and, most importantly, you could plug them in, turn them on and play them – they were musician friendly. The synthesizer wasn’t but soon would be.

* I know – electronic music must technically use electronics – don’t be pedantic.